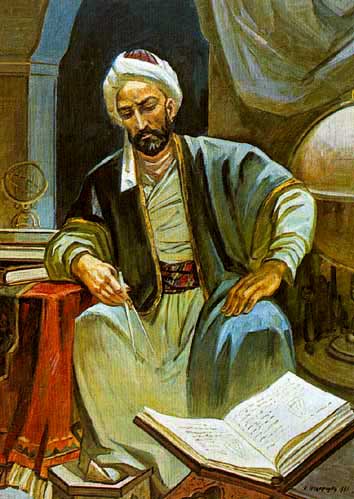 Well known throughout the East and West, eminent son of our people,  prominent astronomer, mathematician, philosopher, and statesman of the  Middle Ages, who ranked equally with Abu Ali ibn Sina, Bahmanyar, Omar  Khayyam, Abu Rayhan Biruni, Nizami Ganjavi, and other personalities,  Muhammad Nasraddin, was born in Hamadan, South Azerbaijan on the 17th of February, 1201. Nasraddin, who completed his first education, began to study  under Faridaddin Damad, a prominent teacher of his time. He was the student  of  Ibn Sina’s school, and this line left its mark in Tusi’s creativity. Nasraddin,  who spent his youthfulness in Tus, one of the largest cultural centers of  Khorasan, took Tusi nickname in honor of this city.

When Tusi was 30 years old, Nasiraddin Magnificent accepted him as an  honorary guest. Here Nasraddin was proposed to translate Abu Ali Miskaih’s  work “Taksibul-Ahlak” (“Moral Cleanness”) from the Arabic language into Persian, the scientist of the Mamun Academy (who lived two centuries ago). Nasraddin rejected this offer wisely and created his own “Nasirean Ethics” (1235) which soon became famous throughout the East.

Soon after writing this work, N. Tusi arrested and sent to Alamut Castle, where he stayed until 1256. During this period Nasraddin wrote important works such as “Sharhul Isharet”, “Tahrir Mecesti”, “Tahrir Oglidiz” (“Euclid’s interpretation”) - had a great impact on the development of geometric thought and created a basis for the further discovery of Non-Euclidean geometry and Lobachevisti geometry.

Nasraddin freed after Alamut Castle taken by Hulagu Khan (November 1256) and Khan appointed him a consultant. Nasraddin, who had a deep knowledge and high human qualities, skillfully explained the importance of constructing an observatory to Hulagu Khan and obtained permission for the establishment of the Maragheh observatory. The environment of Maragheh is rich in natural resources and the air is clear. In this regard, Maragheh town was very suitable for astronomical observations.

There were observatories in Urgench and Reyd 200 years before the Maragheh observatory. However, observations in these observatories were not regular, and there was no single program. Nasraddin aimed to create more accurate observatory, for regular observation, to setting up a unique program for redefining the values of many astronomical measures of astronomical observations. The construction of the Observatory began in 1259, and the building work lasted 12 years. N. Tusi personally led all construction work. Nasraddin was not only the founder of the observatory and head of observations but also the author of the architectural construction project of the observatory. This shows that there was a close connection between mathematical sciences and architecture in medieval Azerbaijan.

Nasraddin was the head of the Maragheh Observatory, where he worked for 15 years with members of different nationalities and created very important scientific works during this period. Among them “Zij-I Ilkhani”, “Shakul-Gita”, “Jame-ul- Hesab” were considered very valuable in the history of astronomy, trigonometry, and development of accounts. It should be noted that “Zij-I Ilkhani” (Ilkhanic Tables) was an astronomical catalog, created by 12 years of intensive work of the Maragheh Observatory staff. It was the only astronomical catalog for 200 years before the establishment of the Ulugh Beg observatory. Astronomers have obtained all the astronomical information needed to compile ephemerides from this catalog.

The flat and spherical trigonometry became an independent mathematics subject, thanks to his work "Kitāb al-Shakl al-qattā" book on the complete quadrilateral. The notion of the spherical polar triangle had been given for the first time in this work. An accurate indicator of the Earth’s precession as a result of the gravity of the Moon, the Sun and other planets (at that time it was believed that the Moon and the Sun are planets in the Geocentric model), the visible average-periodic rotation of the Sun, tables of lunar and solar eclipses, determination of the geographical coordinates of 256 plots, valuable scientific information about the availability of new lands is the achievement of the staff of the Maragheh observatory led by N. Tusi.       Nasraddin showed that during a hundred years, on the point of the celestial sphere of the March equinox, the main points were moved about 123 degrees and he investigated the structure of the calendar.

Nasraddin left a rich legacy not only in the field of natural sciences but also in the field of humanitarian sciences, philosophy, and economics. Between his works, the precious and original work called “About Finance” came to our time. "Sagi-Name", Rubaʿi and poems found in some sources, show that he had a great talent in the field of literature and poetry. Interestingly, he wrote two important works about astronomy, such as the “Sarhi-tag vim” and “Ikhtiyarati-Seyrul-Gamar” in a poetical style.

Nasraddins works include a book known as “Javahirname”, or “Tashavugname”. The book comprises of 26 chapters on gems, aromatic organic compounds, and even important medicinal herbs.

Along with all these works, Nasraddin also had books on “Computational Collection”, “Calendars”, “Astronomy Memories”, “Apollo’s Cones”, “Geometry”, “Interpretation of Signs”, “Eternity and Infinity of the Universe” etc.

Doctor of Physics and Mathematics, who have special merits in the creation of Shamakhy Astrophysical Observatory, in the development of astronomy science and astronomical cadres in our republic, the late Mammadbeyli wrote that Maragheh observatory had been very famous in its time because of very accurate observations obtained at Maragheh. Western scientists had extracted many useful from Nasraddin’s works and used them in their investigations.

It should be noted, that Nicolaus Copernicus, creating his theory of Copernican heliocentrism, used the theory about circles, which Tusi proved. It is known, that traveling with the hope to discover new lands, Christopher Columbus used geographical coordinates compiled by Nasraddin for 256 plots. It had been proven that several devices in Danish Tycho Brahe observatory were the same devices of Maragheh observatory. The star’s globe kept in Dresden is the device of Maragheh Observatory.

It was asked to Hulagu Khan, to take Nasraddin to China, when the issue of building an observatory in China aroused. N.Tusi’s books on mathematics, especially "Tahriri-Oglidis", for a long time, was a lecture book for prominent Western European scientists, including John Wallis, Newton’s teacher.

Nasraddin came to Baghdad with Abaqa Khan and died due to illness on 25 June 1274.

Nasreddin Tusi and his creative collective had written over a hundred books in the Middle Ages such as astronomy, philosophy, medicine, poetry, logic, morality, architecture, and geography. Almost all works of Nasraddin had saved up to our time. Printed copies and manuscripts of his works have been published in many countries of the former Soviet Union (Moscow, St.Petersburg, Kazan, Tashkent, Dushanbe, Baku, etc.) and many foreign countries (Iran, Turkey, Arabia, Egypt, India, Germany, Austria, Belgium, Britain, and others).